In our new ‘Guide to Investing’ blog series, we lead you through seven steps of investing. In the second blog, we’re talking about deal-making. If you want to make a deal, you negotiate terms. That gives some people inspiration to be creative, but you probably shouldn’t be. Find out why! 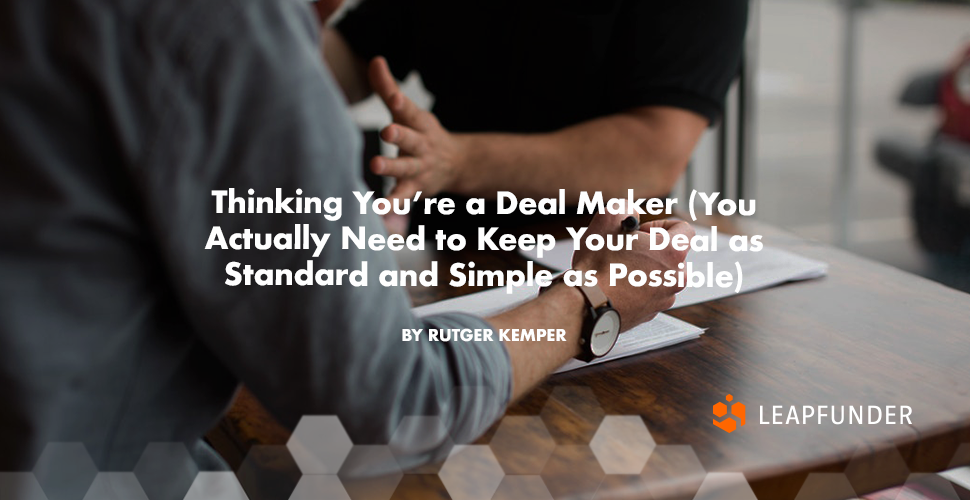 Standard deals
When making deals, everyone wants the best outcome for themselves. Large investors may want to mitigate specific potential risks or put themselves in control of some parts of the company. This means there is quite a lot of language they will normally want, including control rights, a liquidation preference, anti-dilution etc. Generally, informal investors are happy to become normal shareholders along with the founders.

Exotic deals
A common exotic structure is a milestone deal. In this kind of deal, the investor promises extra concessions, but only when certain milestones are met. At Leapfunder we have handled a lot of transactions of this type. So far no one ever met any of their milestones (please let us know if you had such a deal and the milestones were met: it would be our first). In practise the market, and the company, changes direction and when the milestone date comes you wind up having to re-negotiate. Often you can simply no longer figure out how to apply the milestone criteria because the metrics you use have changed. Let’s say an investor invests only part of the intended total cash up-front, but does receive the full share allocation, and promises to put more cash when the startup gets to a milestone. Well, then the startup may face a particularly harmful difficulty. Without the milestone, the startup doesn’t get the extra cash, but there might be no way of getting your shares back. Those deals can hurt. In general, we prefer deals that are as simple as possible: if shares are transferred today, then so is the cash. What we do in the future will have to be decided in the future, in both directions.

Generally, it is important to remember that when you make concessions to an investor now, this may affect your ability to negotiate in the long term. For example, if you have given an anti-dilution or a liquidation preference to an early investor then the next investor will likely want to bring that up in negotiation also. If the founders keep promising everyone an anti-dilution then the founders will likely lose a lot of their company in the future. That can be damaging if it means the founder just leaves. A strong liquidation preference, that has been given to many shareholders, may mean that the founders don’t benefit from an exit. In every funding round, the investors can be reminded that the founders need to benefit also, otherwise you no longer have a motivated team.

To learn more about investing stay tuned for more knowledge.