In our new ‘Raising Funding for Your Startup’ blog series, we’re taking you through six steps of raising funding. In this fifth blog, we’re talking about closing the deal. Learn more about closing deals the right way and the importance of asking for help when needed. 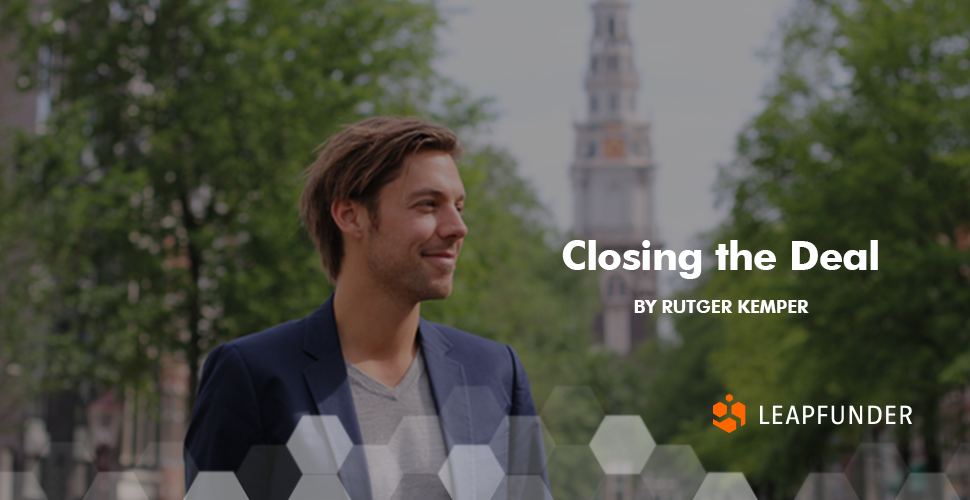 Moving the conversation forward
Before going into negotiation, there are preparations that need to happen. For example, the startup could try to learn more about how many deals and what size of deals the potential investor has done in the past. That’s important because there are so many founders who misinterpret conversations with investors. There might even be some wishful thinking. The startup might believe that a successful deal is imminent, while in fact, the deal cannot happen. If you need €300.000 from your investor, and he/she is only able to free up €15.000, then there is no deal, regardless of how much you might like each other. It is helpful to find things like that out earlier, rather than later. Therefore, as you get acquainted with an investor, it’s important to move towards being very concrete on what you need. If you aren’t clear about some things, you are potentially just wasting each other’s time. If these basics are cleared up, and there is a potential match, you can move forward.

Of course, sometimes, startups don’t feel confident enough to come forward with their wants and needs. It can be awkward to ask an investor how much they typically invest, or how much ‘dry powder’ they still have for you. But if you wish to be taken seriously, you should be able to do that. Of course, you have to ask nicely, and the way you ask needs to match the style of your investor, but once you have their answer, you can start talking about the terms and conditions.

Don’t negotiate alone
If the investor made clear that he wants to invest, it is now important to focus on the terms of the deal. It’s important for founders to find help from someone. This could be from other startups that have experience with negotiations, an accelerator, or another experienced investor that’s on your side. During negotiation, it is also helpful to try to gather as much info as possible about other deals. Both as a startup and as an investor, it is often helpful to make things more objective by benchmarking as much as possible. If you are doing this for the first time, you will likely make mistakes. You can always ask for the professional help from a lawyer or another professional advisor, but finding out from your peers what they have done will also make you stronger in your interaction with those.

What is your pain barrier?
As a startup, you should think about how much of your company you are willing to give away in the first rounds. Keep in mind that there will be more than one funding round. Don’t give away too much, otherwise you will lose your position too early. This can be dangerous for both the startup and the investor. On the other hand, if you are not willing to share part of the success of your company, then you can’t expect others to invest in it.

In the same way, as a startup, you would not want to give away too much control over the company. Certainly, VCs will often want to have quite a lot of control to protect their investment. To some extent that is reasonable. At the same time, it can be dangerous to give away too much control; management still needs to have the freedom to run the company.

During negotiations, you will face many decisions of this type. How much liquidation preference are you willing to give? What kind of anti-dilution can you accept? Is there vesting for founders, etc. In preparation, it will be helpful if the startup founders have formed ideas about where they draw their limits. You may still be dragged across those, but at least you will know when and where that is happening. Sometimes walking away from a deal is a good idea, sometimes it isn’t. This is where the judgement of the entrepreneur becomes critical.

Final steps
Remember, a deal is only done once the signature is set. A lot of deals fall through/fail just before that. Don’t brag about deals with your friends, don’t publish an article about it before you have the signature. No amount of hand-shaking and hugging is a substitute for a signed deal and an executed wire transfer. A pearl of wisdom often heard is that ‘cash is not in the bank until it is in the bank’. The final stage of negotiations is often the riskiest. Seemingly unimportant terms or an over-looked clause in a shareholders’ agreement could still kill a deal. Keep calm. And don’t celebrate until all signatures are set.

And when the deal is closed…. celebrate! Well done!

To learn more about raising funding for your startup, stay tuned for more knowledge.