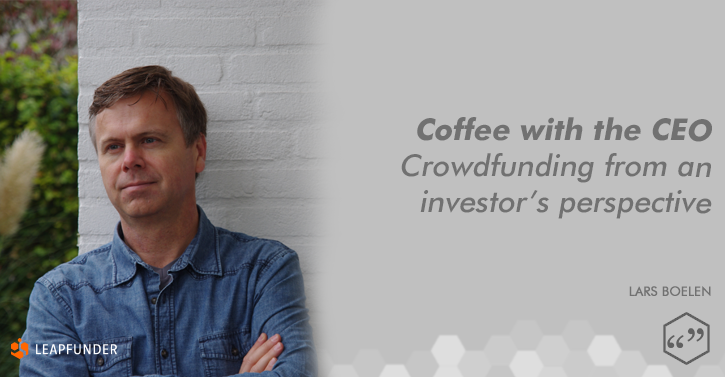 Early 2014 I tumbled into my first crowdfund campaign almost by accident. An anonymous tweet lured me to a crowdfund platform, pointing to an IT-startup looking to fund the development of a beta product into a sellable product. They said they were going to multiply my investment 300 times. I don’t do lotteries and I don’t do casino’s but I took that leap of faith and invested for the first time in my life.

I knew nothing about crowdfunding, other than reading “it’s hot” and “again a Kickstarter startup collects X million”. I didn’t (and still don’t) understand perk based crowdfunding where you pre-order some beta product and hope to receive that product sometime in the unknown future (and I already own a coolbox).

The crowdfund platform where I did my first investment was a Dutch platform doing equity crowdfunding: you invest money and you get shares in the startup. This is capitalism at its best: either the company fails, and you lose your money or the company succeeds and gets taken over by a large cooperation (called an “exit”) or the company does a real IPO and your shares can be sold on a stock exchange. I later learned about a whole range of funding possibilities:

Because I was totally new to small businesses, only having worked for mega corporations for 25 years and having had nothing more than a savings account, I felt very unsafe about my equity investment. So I did something I had never dared to do in my life as corporate employee: I wrote an email to the guy in charge of the crowdfunding campaign (he called himself co-founder and CFO), knowing that the company at the time was only about 5 people so I had at least some chance that my mail would not end up in the circular file.

Than something happened that has literally changed my life: the phone rang 5 minutes after I sent the mail. I talked to him for over an hour and got totally enthusiastic about the proposition. In the following months I talked to him more and more, and because I have some affinity with the product being developed I had some hints and tips for him that were very much appreciated. I started digging in my LinkedIn Rolodex and found numerous leads that may be interested in the product. Bringing in customers is in my direct interest because it will protect my investment. By and by the contact grew more frequent to the point that my Skype had an open line with the company and we were discussing everything from marketing campaigns to coffee chat. By the time “we” had our first shareholders meeting in real life we were friends.

So what I did was a sort of reverse due diligence, I figured out what the company was about AFTER I invested. Professionals will tell you that this is a really bad idea and I will agree to that, I was lucky this first try. So what I have done since then, as I liked the taste of crowdfunding, is call the CEO BEFORE I invest and the strange thing is this: every time I call, send a DM or a mail I get the same result: “Come over for a cup of coffee”. I’ve already decided to leave corporate IT, waiting for a nice exit proposal, and do something more interesting: work for a small startup company where real people work, who live for a cause and know how to convert a setback into an opportunity. Don’t know yet where or when, but the world of startups and crowdfunding is just too exciting, I have to stay involved.