We had a chance to chat with Bert-Jan Woertman, an enthusiastic networker, creative communicator, new business developer and a Dutch Startup Changemaker. After 12 years as Marketing & Communications Director at High Tech Campus Eindhoven, he decided to change jobs and is just starting his role as a Commercial Director at the Eindhoven University of Technology. Find out more about his background, why he loves the startup scene energy & what he predicts for the Dutch startup ecosystem in the near future. 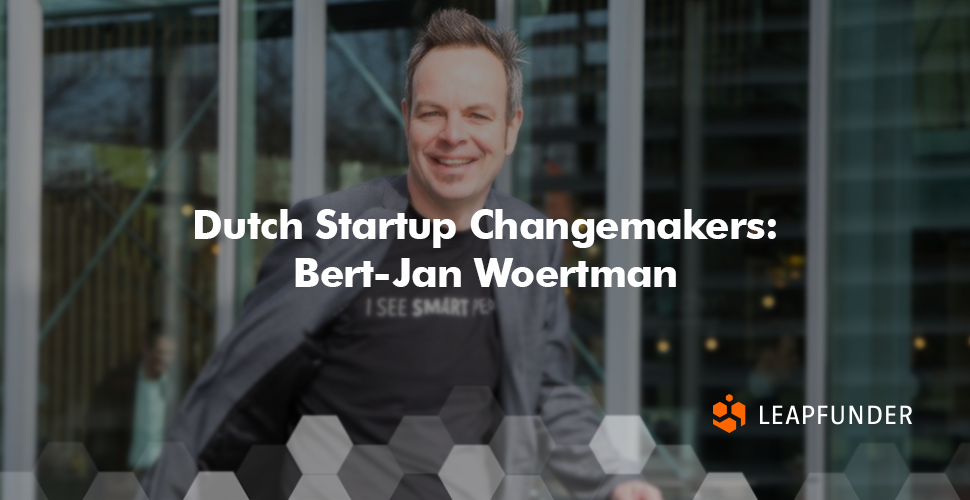 1. Hi Bert-Jan, thank you for agreeing to do the interview. Could you tell us a bit about your background?

My background is in Business Administration and Psychology. In 1998 I started working in Human Resources at Philips Research, a.k.a. NatLab, which later on became High Tech Campus Eindhoven. I was responsible for the development of The Strip, the ‘main street’ of the Campus with its restaurants, cafes, shops, fitness facilities and a conference center. Later on, I was asked to set up a new Marketing and Communications department at the Campus, where I have worked for the past 9 years. Now I’m working at the Eindhoven University of Technology, just a stone’s throw away from my previous job.

2. How does it feel to be seen as one of the changemakers in the Dutch startup scene?

It’s an honor to be seen as a changemaker. I think that has a lot to do with the way I work. I’m a doer and a networker and I’m allergic to hierarchy and bureaucracy. When trying to connect startups to companies I always try to find the shared interest. Both parties have to get something out of it. If you keep addressing that shared interest, you can go a very long way together.

3. After 12 years as Marketing & Communications Director at High Tech Campus Eindhoven, you have decided to change jobs. Tell us about your new role at the University.

My role at the University is to increase the appeal of the campus for outside parties, like tech companies, knowledge institutes, startups, and scale-ups. We want to try and create partnerships, where our students help these organizations with research programs and they can supply additional funding for our PhDs and Professors. For the university, it’s a new role. But for me, it’s not very different from what I was doing at High Tech Campus Eindhoven.

4. Why did the university reach out to you?

I think it has to do with my love of action, just doing things. Doing is the new thinking. I’m always looking for possibilities, to act on something I see, always with the idea to make people and companies happy and to help them grow and be successful. When I see them improving and growing, it makes me happy as well.

5. As a Co-Founder & Community Manager, you’re involved in HighTechXL, HighTechXL Plaza, and Startup Weekend Eindhoven. What is it about startups that particularly attracts you?

I love the energy of the startup scene. At the same time, I admire and respect them so much. Deep down I would like to do what they are doing, but I lack the courage. I’ve actually launched my own startup idea twice, but both times I threw the towel when things got too complicated. I’m learning a lot in this scene because it’s an environment that has to deal with so much pressure – it’s all about maximum impact with minimum resources.

6. What was the trigger for becoming so active on the startup scene?

I saw the fertile ground the High Tech Campus could offer startups in terms of its huge network of knowledgeable, experienced people. So I organized Startup Weekend Eindhoven, which turned out to be a great success. From then on I have been surfing the startup wave. Later, together with a.o. Guus Frericks, Patrick Gabriels and Eric Broekhuizen we launched HighTechXL at High Tech Campus. Within two years we were ranked in the global top 5 High Impact Incubation Programs. That was mainly because of our huge network. Having access to trusted networks within walking distance makes all the difference for startups.

Truly agile startups know they don’t have the funds, time or capacity to achieve success fast enough on their own. Proximity to other brilliant people is the key. At the Campus, companies can tap into formal and informal networks of over 150 OEM’s, SME’s, startups and research institutes. HighTechXL together with campus site management ensures regular encounters happen between different groups of people and the startups. You have to accept that you can’t know everything. But if you can tap into a network of people, you’re a lot smarter.

7. Over the years you have built an extensive, active international network that connects high-tech entrepreneurs, business leaders, creative industries, academic and public sectors. What is the thing you’re most proud of in shaping the Dutch startup ecosystem?

The fact that we were ranked top 5 with our startup incubation program after just two years made me very proud. But I’m also proud of our forward drive. We’re always looking ahead. This year we organized ‘Meet the Industry Giants’ together with Holland Innovative, StartupDelta, Brainport and the German startup network, in order to connect tech startups to the hundreds of big Companies present at the Hannover Messe. We didn’t know whether it was going to work or not, but we just did it. And it was an instant hit. So we decided to make it into a yearly event.

8. What do you predict for the Dutch startup ecosystem in the near future?

I agree with StartupDelta. In The Netherlands, we have the means to become THE startup hub on the West Coast of Europe. That should be our ambition. The combination of big tech companies and a small country with short communication lines and dense networking clusters can work wonders. At the same time, we’re seeing the Dutch startup ecosystem increasingly becoming more appealing to foreign investors.

9. Aside from your new role what will you focus on?

My focus will be on supporting initiatives to help startups and scale-ups grow and evolve. The city of Eindhoven has launched a great initiative in order to bring the different stakeholders in the startup community closer together on a regular basis. I would like to build on that. There is much more power in moving forward together than in every man playing for himself. So if I have a motto it’s ‘one for all, all for one, and everybody for the startups’.

Thank you for the interview and sharing your insights Bert-Jan. We wish you the best of luck at the Eindhoven University of Technology!