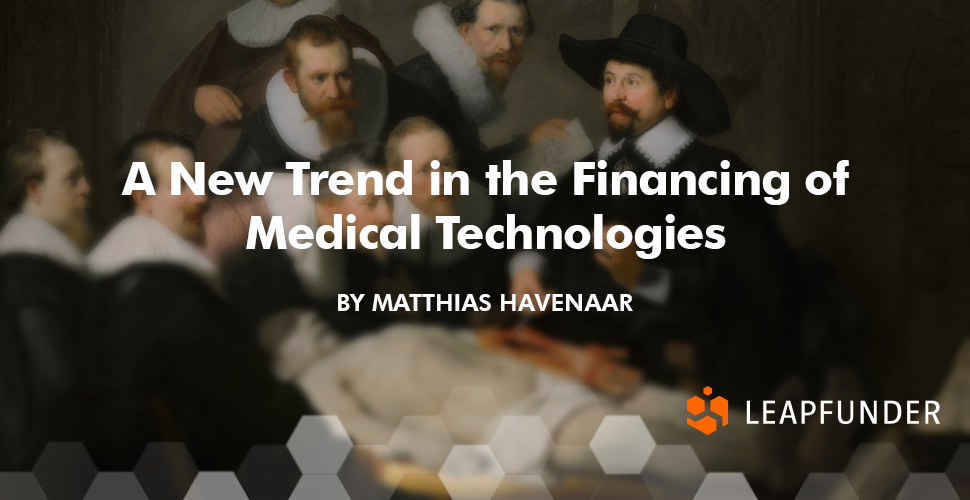 It is estimated that improvements in healthcare have increased life expectancy by about 13 years since the 1900s¹, not to mention their impact on relief of pain and disability. With an ageing population in Western countries and higher spending power of countries like India or China, global health care spending is expected to grow significantly over the coming decades.

“Medical technology has a serious impact on people’s lives”

Medical technologies (medtech for short) can have serious impact on the survival and quality of lives of patients. Non-invasive surgeries such as coronary stents have significantly increased survival rates, medical imaging techniques such as MRI have had a great impact for correct diagnosis, and cardiac defibrillators have saved many a patient from cardiac arrest. Also take for example Sapiens, an Eindhoven-based company that was recently sold to Medtronic, which is involved in making deep brain stimulation -pacemakers for the treatment of Parkinson’s disease. Deep brain stimulation technology has literally given back life to patients who are disabled by Parkinson’s disease. I invite you to watch the following video on the impact of this technology for patients. This is the beauty of medical devices.

“Healthcare investment returns have been exceptional”

According to Bruce Booth, partner with early-stage VC Atlas Venture, Venture capital investment in healthcare has performed exceptionally well compared with other sectors².  One reason for the good performance of medical technology is that its products are often based on patented technologies. For this reason retail prices are often based on (health) benefit rather than on cost price. For example Medtronic, a diversified medical technology multinational, has maintained an average net margin of ~20% over the past 10 years³.

Other explanations for the good performance of healthcare venture capital is the consistency of M&A deals. For medtech companies being acquired is often a part of corporate strategy. Medical technologies often change hands before the product has fully proven itself on the marketplace (again look at Sapiens, which was acquired for €150M before it’s product reached the market). 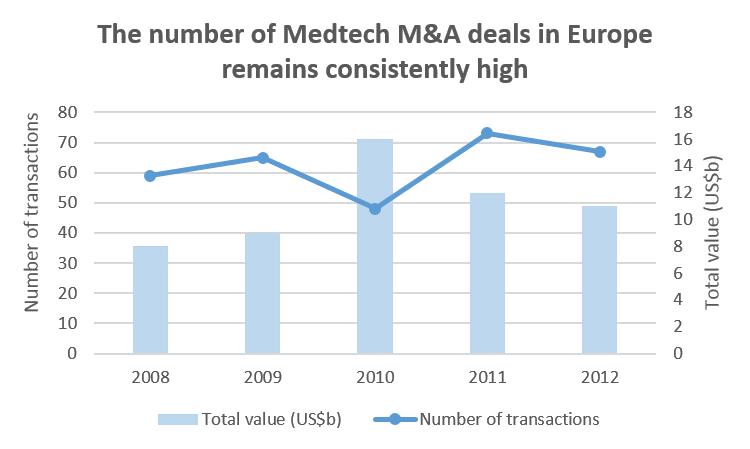 “Despite high returns, investment in medical technology has dropped”

Not all is rosy. The increasing availability of treatment options and a growing patient base has put great pressure on healthcare budgets. For this reason new technologies are now increasingly screened by governments and insurers, not just on whether they contribute to better health but also on whether they can do this at reasonable cost. To deal with stricter health care budgets, hospitals are becoming more organised in collective purchasing groups, putting more pressure on pricing. Regulatory processes too are becoming more stringent, as regulatory bodies have been criticised in recent years for allowing faulty devices on the market. More stringent regulation increases development time and costs for new devices.

After the financial crisis, venture capital investors have become increasingly risk-averse and have become more conservative with investing in medical technology. According to Ernst & Young, investment in medtech by European venture capital firms has dropped from 1.2bln in 2006 to only 553M in 2013. In addition, venture capital flowing into medical technologies is increasingly skewed towards later rounds. Less than a quarter of all medtech venture funding went to early stage companies, a serious drop from previous years. According to BCG, the number of new startups in medical technology has decreased proportionately with the funding available. Unfortunately, the lack of investment appetite has thus left a serious equity gap for early stage medtech companies. 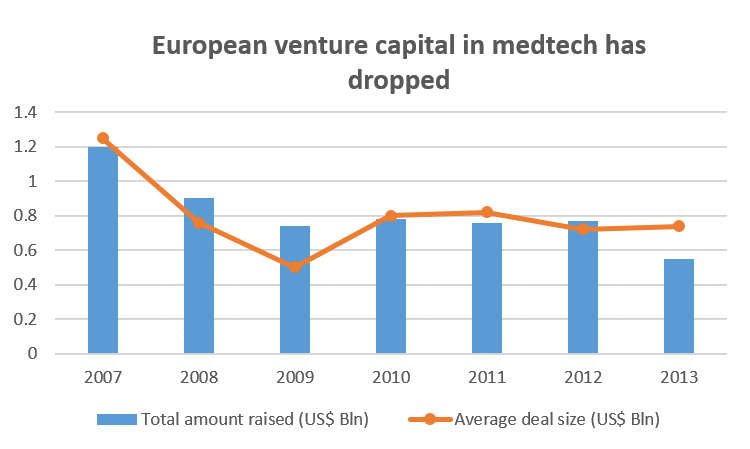 “Through equity-crowdfunding more investors can now participate in medical innovation”

In order to close the current funding gap of medical startups, new ways of financing are needed. Alternative funding methods such as equity-crowdfunding allow budding companies to raise their initial funding from a large base of private investors, rather than from venture capital. One of the benefits of such funding model is that medtech companies can not only attract smart capital, but also involve its stakeholders from an early stage. By involving both physicians and patient organisations, this validates both the company’s concept and demand. This makes the companies more appealing for future investors.

In my opinion, this funding gap is not just the problem of the startup companies. Physicians and patient organisation should get much more involved in kickstarting new technologies that will benefit their disease focus in the coming decades. One great example of an initiative by a patient organisation, that stimulates medical entrepreneurship, is the startup accelerator started by the American Heart Association. This accelerator identifies companies at the technology transfer level. It then invests in these technologies and then connects them with potential investors. The Netherlands is only just starting to form an ecosystem in which entrepreneurship is broadly supported. The creation of such ecosystem, however, will be vital for the success of medical technology in the Netherlands.

A new trend in the financing of medical technologies – success stories

Several success stories have shown that equity-crowdfunding of medical companies is indeed possible. For example, ReWalk Robotics, which makes exoskeleton for people with spinal cord injuries allowing them to walk again, is one of the first equity crowdfunded companies ever to IPO. It raised $1.3M on the equity-crowdfunding site, OurCrowd, in June 2013 and went public in September 2014 at $12 per share (rising as to about $43). Another example, Nfocus, which develops a technology for neurovascular disease that could change the standard of care for brain aneurysms, raised $1.49M on VentureHealth. After a short successful clinical study in 2013 it was acquired by Covidien for $72M. Both projects were successful, because patients, physicians and experienced investors joined together to make the technology possible. Such syndication of more and less experienced investors is beneficial, because it allows less experienced investors to tap into on the experience of the more experienced investors in assessing the team and the technology.

Medical technology can have serious impact on people’s lives and can lead to high financial returns at the same time. This makes this industry very rewarding. Equity-based crowdfunding gives investors the opportunity to not only to help new technologies come about and participate in the company’s success, but also to be a part of a new network of healthcare investors that will support the ecosystem of medical innovation.

Check out MedTech projects on Leapfunder: