2017 was about consolidating our position as the biggest angel investment platform in the Netherlands, consistently with the most deals. In 3,5 – 4 years of history, we’ve only seen about 10% failure rate. That doesn’t mean that all our companies are going to be unicorns, but it does mean that a lot of them have entrepreneurs that are making a very serious effort. 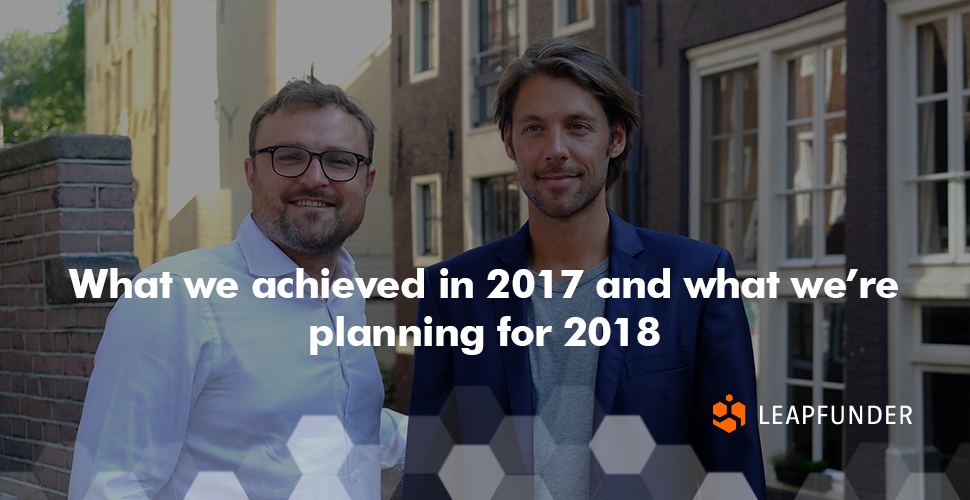 Leapfunder International
After passing regulatory clearance in Q3, we are now live in Germany! We always try new legal products out on ourselves first, and so Leapfunder started a German funding round in Q4 2017 using own new German legal structure. This project has been on our stove for many years and we are very proud to have finally completed it. First German startups have signed up and our product could potentially be a serious addition to the Berlin and German startup ecosystem.

Functionality
Gradually over 2017, we carried out a redesign of every screen on our website. We hope that the process was so gradual that the users hardly ever noticed. Our website is now less complex and much closer to the intuitive needs of the investors and startups. The regularity and quality of the reports the startups have been sending has gone up dramatically, partially because of improved tooling. The biggest extension of the software’s functionality has been that we are now able to handle funding rounds in several European countries. We’re already using it live in Germany. The legal constraints differ from country to country, but the software was able to adapt to the situation. We are still using only one single software for all our transactions.

Dutch Startup Changemakers blog series
We have taken a new initiative interviewing leaders of the startup scene about their vision for the future. The blog series is going great, there is an increase in community building, and these publications have allowed us to bring the ecosystem forward. Building on that success, we were able to bring together the leaders of the startup ecosystem in Amsterdam at the mayor’s residence. This new tradition of holding a Startup Commons was endorsed by the locoburgemeester.

Record for largest round broken again, LF funding can now almost displace an A-round
We broke our record for organizing large funding rounds again. By now several startups have proven that you can raise amountsbetween €0,5 – 2M using our system. This means that we are a real alternative to raising a mini A-round with an investment fund.

It wasn’t easy but we ultimately achieved the major milestones that we had planned in 2017. Here are a couple of big items to keep an eye on in 2018:

Next year you will see new things on the website again. Your feedback is always very important: we build everything in response to user’s demands. Hopefully, by the end of next year, the system will be enriched and more sophisticated.