Buzzoek (Shopper Concepts B.V.), one of Leapfunder’s first clients, has just announced closing an equity round for EUR 100k. Previously, Buzzoek closed two seed funding rounds via Leapfunder Notes, raising EUR 97k in the first round and EUR 138k in the second. Buzzoek now raised EUR 100k in straight equity by a single angel investor,  which triggered the conversion of its convertible notes into equity (depositary receipts) in the investor pool (Dutch: StAK). For one of the rounds the Cap was triggered, leaving investors with additional upside. We wish to congratulate Buzzoek on their success. For Leapfunder it is also the first time a client has converted Leapfunder Notes into equity, which makes it a big success for Leapfunder as well.

In this article we will interview with Buzzoek’s CEO, John Staunton to get insights on what was it necessary to get to this funding stage. Buzzoek provides small and medium businesses with a loyalty platform that allows their customers to register and receive personalized rewards for each visit, while providing merchants with real-time information. 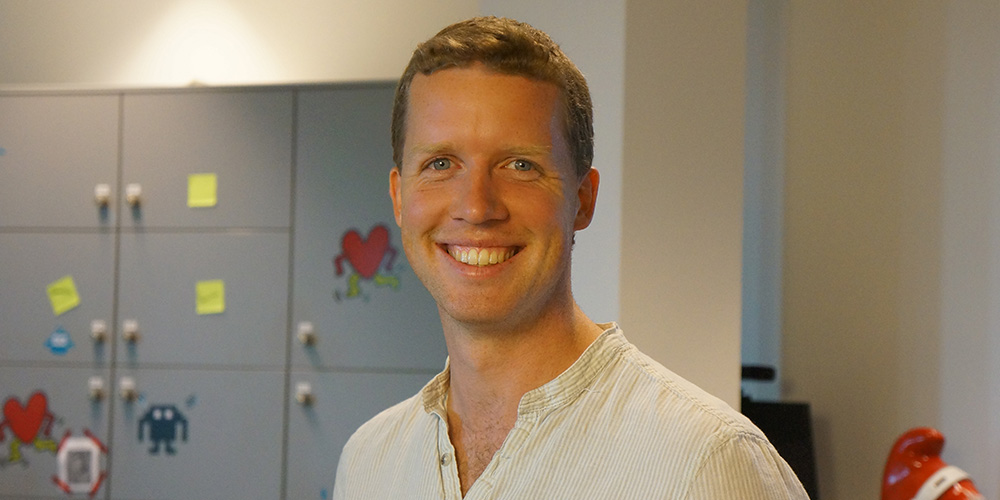 Interview with CEO of Buzzoek

1. Hi John, congrats once again! Could you describe the process from the moment you decided to go for convertible notes until now?
Sure! We had decided to go for convertible notes before we ever heard of Leapfunder and indeed had already done quite a bit of research on the US market as at the time convertibles were much more common over that side of the water than here. Via Startupbootcamp, I got in touch with Tienko Rasker, CEO of Leapfunder, and it quickly became apparent that Leapfunder was the way to go in terms of ease and flexibility. We had a number of family and friends who wanted to invest in us, so we issued our first convertible to bring them all together into a single investment. After that success, and sustained success in the Startupbootcamp accelerator, we issued our second Leapfunder convertible to bring a number of interested angel investors on board. We structured this second convertible so that after conversion all of the convertible holders would convert into the same investor pool (StAK) thereby creating a single entry on the cap table. We then had somewhat of a pivot (or growth spurt, depending on how you look at it!) within the company and extended Buzzoek with CashOrCard POS. For this, we needed investment for R&D and marketing… this came in the form of our newest investor who invested €100k straight equity, triggering the conversion of the notes.

2. When you look back, how is your recent equity round different from the first two Leapfunder rounds, in terms of negotiation process, duration and complexity?
As this round was one single investor who knows our company well, the round duration wasn’t significantly different – bringing multiple investors in for a single note does take some time, as does getting an agreed term sheet on the table for even a single equity investor. Negotiation and complexity-wise, however, this round was a lot more complicated than with our first two rounds of funding – this time, we needed to negotiate valuation, etc. while previously the terms were set at the start of the round. We also needed to have a legal team put together a term sheet (drafts plus the final version), extending the timelines and adding a lot of costs.

3. How was investing via Leapfunder perceived by your investor? Did the 100k angel investor, invest in your company in the previous two rounds?
Yes, the angel investor was one of our Leapfunder investors – he had previously invested in our second round. As many of our investors saw, the Leapfunder rounds were an easy, fast and painless way to invest in the company… with downside protection if things didn’t pan out as planned. The reason our angel investor decided to go with straight equity was because of the investment size.

4. You were one of the first to use Leapfunder. Are you happy with the support provided during the whole investment process? If you were asked to give an advice to a startup which is about to decide if convertible notes are a good way to raise early investment, what would you recommend them?
Support from Leapfunder was very accessible and always quickly given. Any issues (and there were very few – mostly cosmetic changes to the investment pages) were quickly resolved. We certainly found convertible notes are an excellent way to raise early investment, not least because they avoid the tricky question of startup valuation. Further, they let startups easily bring friends and family on board without later facing challenges due to a messy and overcrowded cap table.

5. What would you say to to investors are the benefits of using Leapfunder?
There is both downside and upside protection – if the startup doesn’t perform as expected, the percentage of shares allocated to convertible investors at conversion is higher, but if the startup wildly exceeds expectations and the valuation skyrockets, the cap ensures that note holders won’t end up with a fraction of a percent of the company. Further, the investment process via Leapfunder is very straightforward – investment can be done with a few clicks (via iDeal, etc.), all documents are taken care of, signatures are digital and of course while you’re on the Leapfunder site you can take the opportunity to browse other great investment opportunities!

6. Now that you’ve successfully closed this equity round, what are the next steps in terms of funding? Can you give an insight in what you will use this money for? Which markets will you focus on?
Since raising this small equity round at the end of May, we have already put the funding to excellent use developing our new product (CashOrCard POS). We used this money to develop the product in only 7 weeks and have been marketing it globally via some Facebook and AdWords campaigns. We’ve had signups from 17 countries, and have now started to focus on the next round of funding which we will use to roll out the product across these countries and prove traction before raising a Series A. To finance this roll-out, we’ve opened another Leapfunder note (private placement this time) to bring in more angel and informal investors. The first focus markets are UK, Ireland and Benelux, although we intend to quickly roll out to other markets too.

7. Series A – when, where and how? How long do you think it will take for you to start working on raising funding from the VCs? Are you interested in venture capital from the Netherlands, from abroad, or both? What do you think it will take to get to the next round?
Our Series A is not far away at all – as mentioned earlier, we’re raising a relatively small round now (c. €200k) to prove conversion and sales of our new product before we raise VC funding. We’ve had discussions with a lot of VCs from both the Netherlands and overseas as we’re rolling out a global offering. To get to this round, we already know what it will take – investors want to see proven traction (which we have already shown with signups / downloads) as well as conversion to paying customers (which we’re going to use the €200k to prove) and growth month-on-month. Expect to hear a lot from CashOrCard and Buzzoek over the coming months!